The HP-25 Cable tester to the Rescue!

My PROFIBUS troubleshooting tool of choice is ProfiTrace by PROCENTEC – an excellent tool. In my toolbox, I also have a cable tester called the HP-25 by HI-PORT CONTROLS in the UK. If I am working on a new segment, I will take it out and use it. However, up until now, I have never used it to troubleshoot an active network.

The main reason for this is that with ProfiTrace, I can normally quickly figure out what is going on without having to disconnect the network. However, the other week, I ran into a setup that confused me. The network had been running for close to 20 years and had only recently been experience some problems. Then a day before I got called in, the network fall over – they could barely run – faults all over the place.

Connecting up ProfiTrace, I instantly saw that the network was in trouble. It only took one second for the Network Condition Indicator to turn red. The waveforms were awful – there were refections and noise on all of the nodes and low signal levels. They were running at 500 kbps with six devices and around 70 meters of cable. As I dove into the wiring, I discovered two spur lines at each end of 2 to 3 meters and EMC violations, and a small section of non-PROFIBUS cable. Plenty of reasons for the bad waveforms, but since all the problems I saw were there since start-up, I had not found what had pushed the network over the edge. Also, I had a feeling that all of the problems that I had identified were muddying the waters so that I could not see what the killer problem was.

The next thing that I did was to check both terminators – they were OK. Then I checked the connectors on the low signal levels – they were fine. Then, as I sat there thinking, I had a flash of inspiration – why not go back to basics and use the cable tester to see if the cabling system was OK. Out came my trusty HP-25, and a few minutes later – Short from B to shield! The HP-25 had identified the problem. Next, we limited the cable sections to isolate where the short was. There was one 50 meter segment that moved on the machine. The short was in it. Once we replaced the cable, the machine could run again. 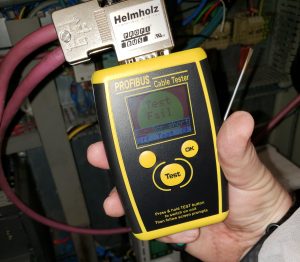 The waveform was still awful, and there were errors all over the place, but the machine could run! On the next scheduled downtime for the machine, we will be going in and fixing all of the outstanding issues so that the network is no longer just hanging on.

I have now found a new respect for my HP-25 PROFIBUS cable tester – Yes, they are useful on a running system. Granted, you have to take apart the network to use it, but if things are so bad that you can’t run – taking it apart is not such a big deal.